Goldhanger in the Domesday Book

Goldhanger is first mentioned in the Domesday book but there has undoubtedly been a settlement here since long before that. Neolithic flints have been found in Goldhanger Creek, dating some form of civilisation back to about 5,000 years ago.

Grassland where the marigold grows

The present name, Goldhanger, is thought to be of Norse origin and in the Domesday book is spelt Goldangra. In Maura Benham's book: Goldhanger - an Estuary Village, published in 1977, several methods of spelling and an origin for the name are identified:

Goldhanger, Goldanger, Goldangra, Goldangre - the name was spelt in many different ways from the Domesday records to the 19th century. Always the first part was 'gold', and this is said to refer to a yellow flower. For the second part there could be two meanings, 'hanger' a hill, or 'anger' grassland (as in Ongar), and the village being set on flat land, the latter is the more likely. As to the yellow flower, this is thought to be the Corn Marigold, giving the name the meaning of Grassland where the Corn Marigold grows. 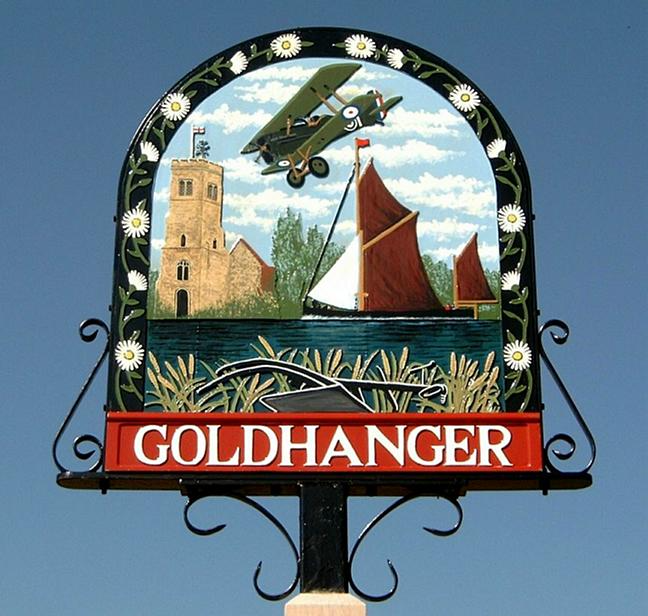 The village sign depicts the iron plough - invented by William Bentall, a First World War aeroplane from Goldhanger Airfield, Thames Barges - so iconic in this part of the world, and St. Peter's Church tower.

The border flowers are the Marigolds from where Goldhanger gets its name (see above).

Credit to David Newman: Goldhanger Past

There are some beautiful walks around Goldhanger and we are fortunate to have miles of sea wall stretching along the Blackwater Estuary as far as Maldon on one side and Tollesbury and beyond on the other. The estuary is teeming with bird life and is a fascinating and inspiring place whether the tide is in or out (check out the tide times). Once you return from your rambles, there are some very welcoming watering holes in the village to revive and refresh you.